Bluetector's treatment systems combine anaerobic and aerobic methods originating from traditional wastewater treatment with our proprietary bioaugmentation and controlled anammox processes, achieving an almost complete nitrification and denitrification for manure and biogas digestate treatment, without the need to add chemicals or carbon sources to maintain the biological processes.

Due to our purely biological processes, the operating costs of our systems are low. 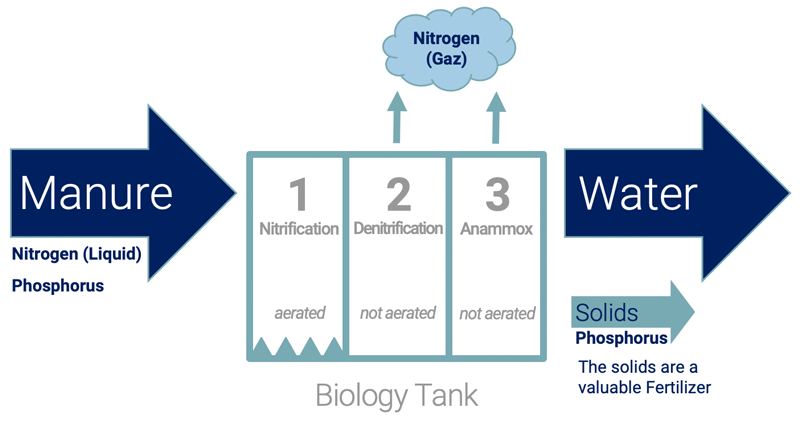 During nitrification, ammonia is oxidized to nitrite, which is then oxidized to nitrate in a second step. The nitrogen bound in the nitrate is converted by denitrification to molecular nitrogen (N2), i.e. it is converted into a form that is largely inert and cannot be used as a nutrient by most living organisms. As a result, the nitrogen is no longer available as a fertilizer in waters and soils and is no longer environmentally relevant. Most of the molecular nitrogen (N2) produced is released into the atmosphere, in which it is the main component anyway.

Thanks to our specially developed biological process, Bluetector has succeeded for the first time worldwide in achieving an almost complete denitrification in the treatment of manure and biogas digestate, without the need to add any chemicals or carbon sources. As a result, Bluetector achieves previously unattained degradation rates in the nitrogen content of approximately 98% on average.

The environmental concerns about manure arise from the fact that nitrification also occurs naturally in agricultural systems where manure is applied to the ground. The primary product of nitrification, nitrate, leaches into groundwater, producing acute toxicity in multiple species of wildlife and contributing to the eutrophication of bodies of water, which become depleted of oxygen. Larger life forms, such as fish, suffocate to death. Such bodies of water can no longer support life.

Previous biological processes have not been able to achieve a complete denitrification in manure treatment and therefore only achieve degradation rates of approximately 80% in nitrogen content, so that a lot of nitrogen is still present in the effluent, much of it in the form of problematic nitrates.

In traditional biological treatment systems with elimination rates in nitrogen contents of only 80%, no more than about 100 cubic meters of effluent per hectare may be applied.

With the Bluetector technology, the considerably higher quantity of around 1,300 cubic meters of effluent per hectare can be distributed.

Our proprietary manure treatment process has been developed by Bluetector. Written contracts and in some cases even legal regulations exist with all existing and previous project and sales partners, which state that all rights to our process are held exclusively by Bluetector. In addition, Bluetector filed a patent application for the process in January 2020.

Nitrification and denitrification are essential components in the natural nitrogen cycle of ecosystems, as the following diagram shows. 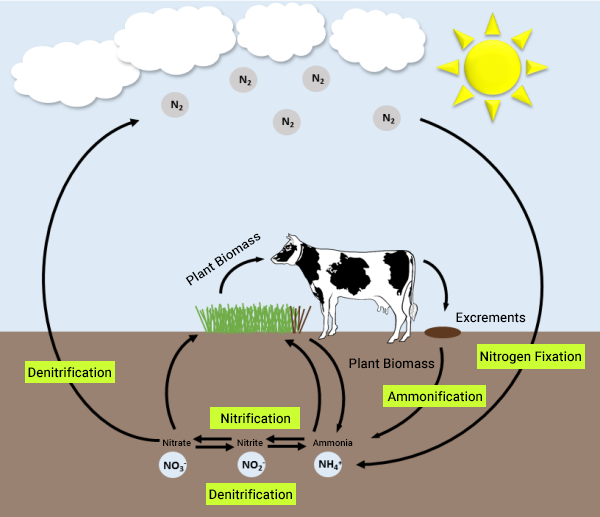 Overview nitrogen cycle, from: Didactics of Chemistry, University of Bayreuth

The Bluetector technology solves the most serious environmental problems of agriculture and enables farmers to greatly reduce their costs for manure management.

Depending on the amount of manure or biogas digestate, a Bluetector system usually pays for itself within 1-3 years. The more manure, the faster the payback time of a Bluetector plant.

Due to nitrates, too much manure leads to contaminated groundwater - and thus to dangerous drinking water quality. Nitrate can be converted in the human body into nitrosamines, which have strong carcinogenic effects.

Too much manure causes excessive algae growth in water bodies, which, due to oxygen depletion, leads to dead zones in waters where no fish can live.

Thanks to our patent-pending bioaugmentation, Bluetector does not require the addition of chemicals or carbon sources for its biological treatment, even with fermentation residues.

All our systems are continuously remote-monitored by Bluetector specialists. Our customers do not have to bother about the control of their plant.

Bluetector's systems can be easily integrated into the customer's existing infrastructure. There is no need to build new tanks.

The biology tank developed by Bluetector combines the three required zones for the different biological processes in a single tank. This design has several advantages for continuous operation of the manure treatment and also includes structural measures for process safety.

Integration of a Bluetector system into existing infrastructure

It is not always necessary to build a new biology tank. Often existing tanks can be used for a Bluetector system for manure treatment. In such cases, the construction of a new tank can usually be avoided, which means that the Bluetector system can be installed faster and more cost-effectively.

The photo below shows how Bluetector 2019 easily integrated a pilot plant for the treatment of fermentation residues from a biogas plant near Munster, Germany, into an already existing tank on the farmyard.

Bluetector's manure treatment systems are designed in such a way that they can be easily integrated into any existing infrastructure on a farm or biogas plant, without necessarily having to build new tanks for the bioreactor. Existing tanks should have a minimum height of 6 meters and a diameter of 15 meters, so that Bluetector's BlueBox Ultra can be optimally integrated.

Existing screw presses or centrifuges can also be integrated into the treatment process, so that the purchase costs for a manure treatment system can be kept as low as possible.

The technical container for a system to treat 100 tons of manure per day consists of a 40-foot container, which is placed next to the biology tank. The pumps, the blowers, as well as the entire electronics and control system are located in the container.

Scientific accompaniment by the University of Applied Sciences Munster

The University of Applied Sciences of Münster has scientifically monitored a pilot plant operated by Bluetector in Germany for the treatment of fermentation residues from August 2019 to January 2020.

The University of Applied Sciences of Münster is one of the largest and most successful technical institutes in Germany dedicated to applied sciences. The university has about 1'000 employees, of which more than 250 are professors.

The pilot plant had a capacity for the biological treatment of fermentation residues of 25 tons per day.

From the result report of the University of Applied Sciences of Münster:

" Through the scientific monitoring the results and thus the performance of the plant in the treatment of the fermentation residue were determined. As a result, at the end of the series of investigations, a quantity, nutrient and energy balance was drawn up and an economic feasibility study was carried out as far as the data basis allowed. In addition, an assessment of the utilization of the resulting water was given". 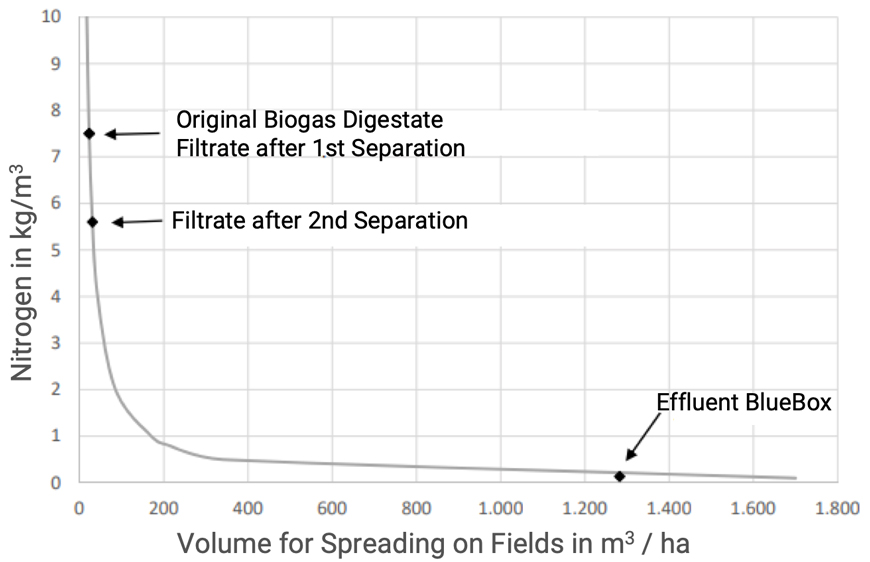 "The nitrogen concentration in the inlet was between 5.0 and 7.0 kg/m3 NTot and in the outlet always below 0.3 kg/m3 NTot . This would correspond to a reduction in nitrogen levels of over 94%.

"Compared to the nutrient values, especially nitrogen, the nutrient levels in the outgoing effluent are considerably reduced. This means that it is possible to significantly increase the spreading quantity of the treated fermentation residue in relation to the area, especially in the vicinity of the plant, which would also lower the transport costs accordingly.

Figure 23 shows the relation of the spreading rate to the nitrogen content with a threshold value of 170 kg/ha nitrogen according to German agricultural legislation. In addition, the operating points for the initial fermentation residue, for the filtrates after the respective separation stage and for the BlueBox effluent are shown. An alternative to spreading by means of liquid manure barrel is the distribution via an irrigation system. Outside of the restricted periods and when the area is vegetated, the spreading can thus be carried out over the entire vegetation phase".